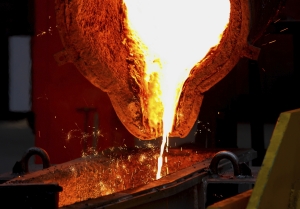 How Does a Steel Mill Work?

The first step in the two-step process requires iron ore. The ore is smelted in a blast furnace with limestone and a fuel called coke that is created from coal. This fuel is very high in carbon and has been used as far back as the 4th century in China. In the U.S., coke has been used since the 1800s.

Now that the iron ore has been smelted, one of two things can be done with it. It can be made into pig iron, which is an intermediate product. Pig iron is very high in carbon and is very brittle. Because of this, it can’t really be directly used for anything. However, it can be saved and later melted down to be used in making steel. This is basically a way of creating a raw material for transport or for making large batches of steel later. If the iron is left molten, it can be directly used to create steel. In this phase, impurities like the large amount of carbon, phosphorus, and sulfur are removed from the alloy and other elements like nickel, vanadium, chromium, and manganese are added. The steel is then cooled and turned into ingots, blooms, sheets, and slabs through a variety of different techniques.

A mimimill is the term given for a secondary steel producer. These minimills acquire steel scraps from a number of places (automobiles, rubble from demolished buildings, etc.). They then recycle the steel by melting the scraps using an electric arc furnace. Once done, they recycled steel is cast into ingots or sheets.

« « Previous: Protecting Your Building from Earthquakes
Next: Auto Shop Buildings » »