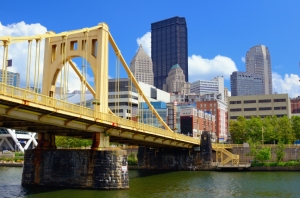 The United States Steel Corporation, often referred to as U.S. Steel, is one of the top steel producers in the world. The company has operations in the U.S., Central Europe, and Canada. As of 2010, U.S. Steel was the 13th largest steel manufacturer in the world.

U.S. Steel was formed in 1901 by Elbert H. Gary and J.P. Morgan by buying out and merging Gary’s Federal Steel Company, William Henry “Judge” Moore’s National Steel Company, and Andrew Carnegie’s Carnegie Steel Company. The resulting business became the world’s first billion-dollar company and, at one time, was the largest steel manufacturer in the world. U.S. Steel grew at an incredible rate, buying other competitors over the years. In 1911, the U.S. government actually tried to break up the company via antitrust laws, but they were unable to.

Right out of the gate, the company controlled two-thirds of the steel industry in the U.S. However, the company did begin life with a large amount of debt. Carnegie demanded to be paid with gold bonds, which were quite costly, plus the company was concerned about antitrust litigation. By 1911, the company’s share of the market had dropped to 50 percent, and many of their competitors were using more innovative techniques.

In 1953, U.S. Steel reached its peak year. The company produced over 35 million tons of steel during that year, just a year after President Truman tried to seize the company following a dispute with the United Steelworkers of America union. The takeover was blocked by the Supreme Court. However, in 1984, the government was successful in preventing U.S. Steel from buying National Steel and, through pressure from congress and United Steelworkers, prevented the company from importing slabs from the British Steel company.

By the 1990s, U.S. Steel had shifted away from actual steel production. Instead, most of the company’s profits were coming from the energy industry. CEO Thomas Usher separated the company, spinning the non-steel portions of the corporation off into their own businesses. In 2001, the smaller U.S. Steel purchased plants in Serbia and Slovakia, the first time it had purchased international assets. However, the corporation continued to decline. In May of 2014, a number of employees were laid off, and in July, the corporation was delisted by the S&P 500 index due to declining market capitalization.

Despite this, U.S. Steel has left its mark on the steel industry. In fact, the U.S. steel industry wouldn’t be nearly as large as it is today were it not for the company. In recognition of their contributions, the tallest skyscraper in Pittsburgh is named the U.S. Steel Tower. The Pittsburgh Steelers football team has also incorporated elements of the company’s logo into their team logo.

« « Previous: Andrew Carnegie and Steel Rails
Next: The American Iron and Steel Institute » »