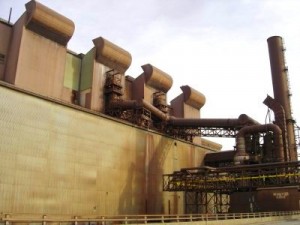 Weirton, West Virginia, may not be known for much today, but during the 1900s, it was known for its steel production. It was the home of the old Weirton Steel Mill, the main mill of the Weirton Steel Corporation.

The company was founded by Ernest T. Weir who, along with his business partner James Phillips, purchased a small tin mill in Clarksburg, West Virginia. They later decided to expand, and they relocated the business to Hollidays Cove, which would later merge with the towns of Weirton Heights, Marland Heights, and unincorporated Weirton to become the city of Weirton. Weirton Steel, at its height, employed more than 12,000 people. This made it the largest private employer not only in Weirton but also in the state of West Virginia.

In 1929, Weir saw another opportunity to expand his company. He orchestrated a merger with the M.A. Hanna Company in Cleveland and the Michigan Steel Company in Detroit to create National Steel Corporation. This newly formed steel business quickly became one of the country’s largest producers of the metal.

Unfortunately, the steel industry took a sharp decline in the 1970s, and the company fell with it. In 1983, the employees working at the Weirton Steel Mill purchased the company from National Steel. At the time, the resulting corporation had the largest Employee Stock Ownership Plan in the world. However, it still wasn’t enough to save the business, and the company filed for bankruptcy in May of 2003.

Much of Weirton Steel was purchased by the International Steel Group (ISG). The company created the ISG Weirton Steel division, but in 2005, ISG itself merged with Mittal Steel, which a year later merged with Arcelor to create Arcelor Mittal.

All this changing of hands meant changing of plans as well, and the Weirton steel mill quickly fell off the radar. Arcelor Mittal is a large international steel manufacturing company with mills around the world, and they no longer needed Weirton to continue its production. Today, only the tin-plating part of the mill is in operation, and only about 1,200 people work there. The Weirton mill does still have the designation as one of the largest tin-plate makers in the United States, however.